Deconvolution is an advanced image processing function that is used to sharpen images by reducing blur. The blur in an image can be caused by many factors, such as bad focus, poor lens or optical system quality, camera shake, or atmospheric turbulence. But the bottom line is that even a sharp looking photo has some amount of blur and can often be made to look sharper with deconvolution.

The blur kernel (often referred to as the point-spread function, or PSF) is what defines how an image is blurred. Imagine a perfect point of light. As that light passes through a lens, it will spread out slightly due to imperfections in the lens itself and other factors. It will also be spread out slightly as the light travels through the air because of air movement. The result is that when the light that started as a point arrives at a camera sensor, it will no longer be a point. It will be spread out, probably taking on a gaussian shape. This shape is the point-spread function, or the blur kernel. If we know or can estimate the blur kernel, then we can use deconvolution to try and restore the image. Astra Image allows you to generate very precise blur kernels of different sizes and shapes.

All images contain some noise. One of the important points with any deconvolution algorithm is how well it handles noise. We don’t want the noise to be amplified in any way. Astra Image gives you many kinds of deconvolution methods which use different strategies to handle noise, so you can most likely find one that works well for your image.

The deconvolution process with sometimes produce artefacts around sharp edges. This is especially true with astronomical images containing stars. To help with this, Astra Image provides an advanced tool to help mitigate the effects of artefacts and ringing.

The Deconvolution tool is split over three tabs. 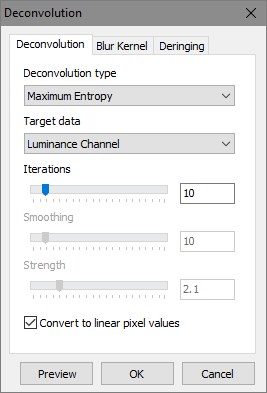 Deconvolution type: this drop-down list box contains the different types of deconvolution that are implemented in Astra Image: Van Cittert, Jansen Van Cittert, Landweber, Lucy Richardson, Maximum Entropy, Total Variation and Weighted Derivative. All these methods are iterative, except for weighted derivative, which is a one-shot method.

Target data: contains two options, Luminance Channel and RGB Channels. Often, good results can be achieved more quickly by processing the luminance channel of an image only. If this option is selected, Astra Image will separate the color and luminance information, apply deconvolution to the luminance information, and then recombine the color and luminance back into a standard image. However, sometimes it may be good to process the red, green and blue channel of an image individually, such as when removing motion blur. In this case, processing will take longer as all three channels are processed.

Smoothing: this setting applies to the Total Variation and Weighted Derivative deconvolution methods only. A higher value produces a smoother image with less artefacts, but often with the loss of some small detail. Lower values produce an image with much fine detail, but which may include noise and / or artefacts.

Strength: this setting applies to the Van Cittert and Lucy Richardson deconvolution methods only. Higher values will produce a stronger sharpening effect but may also increase noise and artefacts.

On this tab, you can set up the kind of blur kernel you want to use by setting the size, shape and rotation. 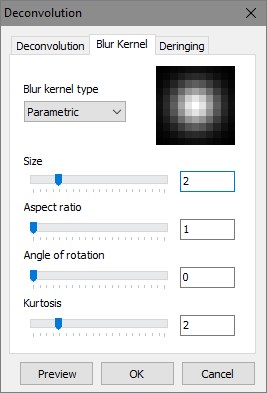 Blur kernel type: contains two options, Parametric and Motion Blur. When set to parametric, the blur kernel will be generated by a mathematical formula that incorporates the Size, Aspect Ratio, Angle of Rotation and Kurtosis settings. When set to Motion Blur, the blur kernel will resemble a line which can be adjusted by the Size and Angle of Rotation settings. A preview is displayed next to this drop-down list box.

Angle of rotation: when the aspect ratio is less than 1.0, or when using the motion blur mode, you can adjust the angle of the blur kernel using this parameter.

Kurtosis: changes the tail weight of the blur kernel curve, as can be seen in the charts below. This gives you great flexibility in defining a blur kernel that is a very close match to that produced by your optical system. 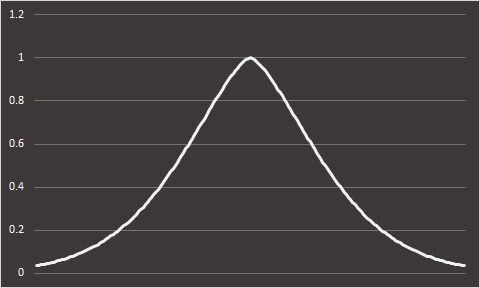 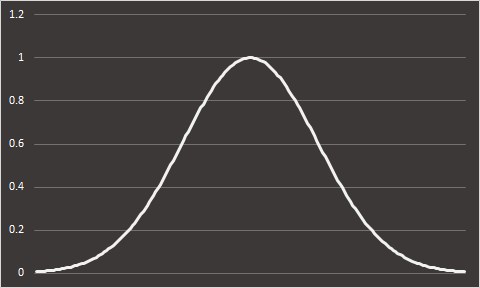 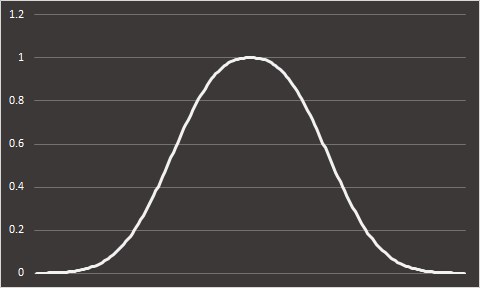 This tab has the settings to perform derining, which can help to remove artefacts caused by the deconvolution process. This is often especially noticeable in astrophotos containing stars. 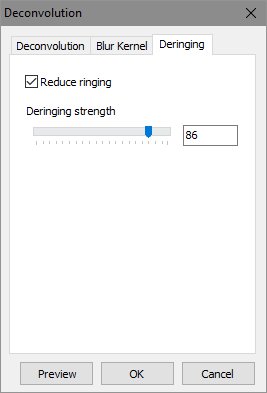 Reduce ringing: when checked, Astra Image will apply deringing and attempt to mitigate the effects of ringing around sharp edges.

Deringing strength: sets the amount of derining to be performed. A higher value produces a stronger effect. This should be set as low as possible while still producing a pleasing result.