Some images are spoiled by poor focus. The Remove Focus Blur tool in Astra Image can help to restore these images.

This tab has the setting for deconvolution. The deconvolution functions use the blur kernel that is set up on the Blur Kernel tab. 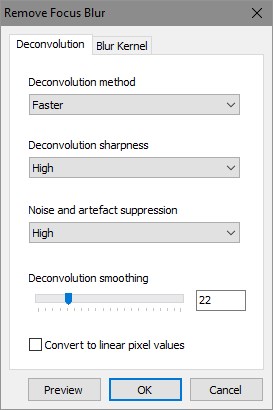 Deconvolution method: you can select between Faster and Higher quality. Usually, the Faster option is sufficient.

Deconvolution sharpness: this option tries to restore details lost by the noise and artefact suppression. This should usually be set to High.

Deconvolution smoothing: if a photo has a lot of noise or artefacts, smoothing can be used to make the image look more appealing. Lower values produce less smoothing. This should be set as low as possible. Please note that this option can only be used with the Faster deconvolution method.

This tab let’s you set up a blur kernel that defines how much the image is blurred.

Blur kernel type: usually, this should be set to Out of Focus, as this is the best shape for removing focus blur. But other shapes, especially Cauchy and Lorentzian, can be useful too.