The Simple Deconvolution Tool is good for sharpening images with a minimum of effort. It is fast, easy-to-use and has several deconvolution methods, one of which will probably be a good match for your photo. 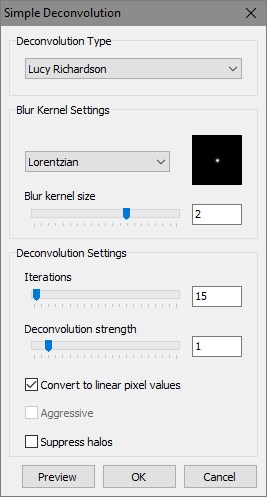 In this group you can define a blur kernel which will be used to sharpen your photo.

Blur kernel size: this sets the width (or sigma) of the curve used to make the blur kernel. Larger values have greater effect. For sharpening most images, a good starting point is usually in the range of 1.5 – 2.0.

This group allows you to set the parameters for running deconvolution

Iterations: the number of iterations to do. More iterations can lead to a stronger effect, but after a certain point the deconvolution algorithm with often converge, which means that doing more iterations after that point will have little effect. Usually 10 – 20 iterations are sufficient.

Aggressive: only applies to the Lucy Richardson deconvolution type. When checked, the deconvolution will be accelerated so less iterations are required. However, this mode is not good at noise suppression, so it should be used carefully.

Suppress halos: when checked, an estimate of the location of halos (or artefacts) will be done and then an attempt will be made to mitigate their effects. This can result in a more natural looking result in some circumstances.